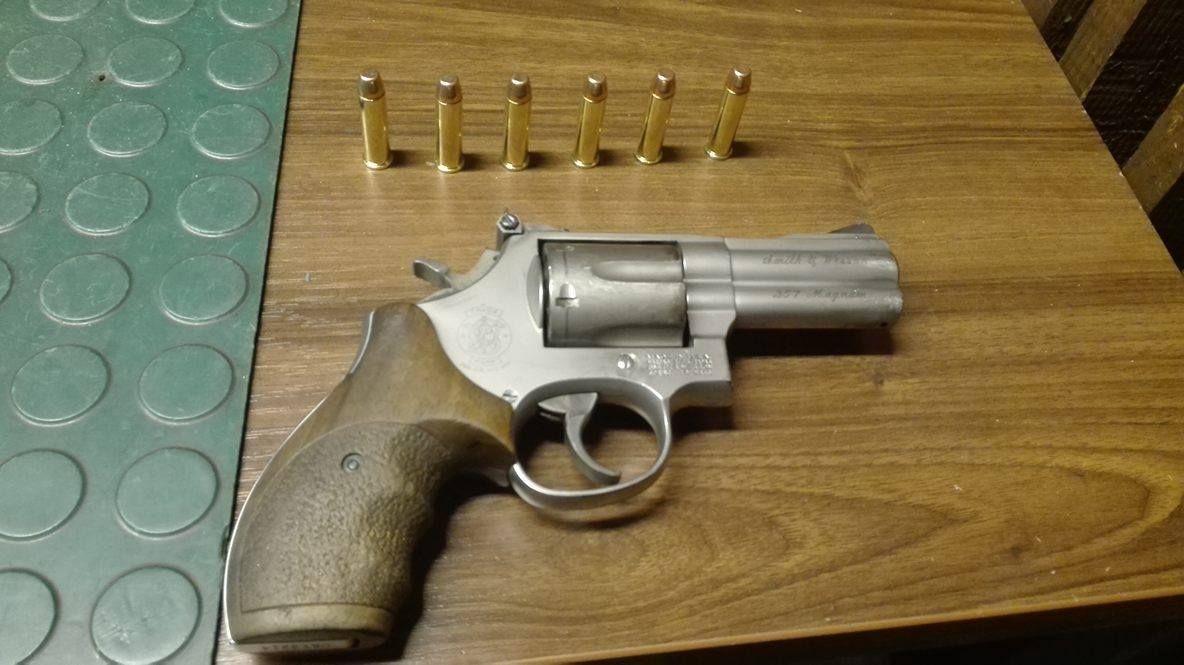 The .380 ACP pistol cartridge has been around for nearly 100 years. And during that time, they have become popular for use in pocket pistols and compact personal protection models because the cartridge is reliable and it is effective.

But outside of their intended purpose, the .380 ACP cartridges has had a bad rep with some shooters because of their less than impressive ballistics when fired from a handgun. But this my friends is simply not true.

You see folks, there are two very common misconceptions when it comes to .380 ACP handguns and their effectiveness:

1) That they're "not powerful enough" to be used against humans;

2) That they don't perform well out of short barrels.

The funny thing is, both of these thoughts are incorrect. In fact, some.380 ACP handguns actually perform well in the self-defense role!  And the same goes for the cartridge.

The .380 ACP has some pretty impressive ballistics when you consider how small and light these handguns are!  The problem is most people don't understand exactly what the .380 ACP is capable of, but that's where we come in!

What follows are four common myths about .380 ACP handguns and their cartridges. After we go through all of them, you'll have a much better idea about what to expect from your .380 handgun when it comes time to use it in your self-defense role.

Truth be told, there are plenty of instances where a properly placed .380 ACP round has saved lives.  This is especially true in the case of women who are afraid to shoot larger caliber handguns but can handle the recoil of one chambered in .380 ACP.

Do keep in mind though, that while you CAN use your .380 ACP cartridge for self-defense, you may want to consider beefing it up a bit by using better hollow point ammunition. The reason is this:  Most .380 ACP bullets are usually designed to be more for range time use rather than personal protection. Why? Because the .380 ACP isn't considered the most powerful of all handgun cartridges out there.

The best defense loads for the .380 ACP cartridge usually have a muzzle velocity of about 1,150 feet per second (fps) which is on par with some 9mm Luger rounds.  And don't get me wrong, this is still more than enough to stop an assailant in their tracks. But the problem is that if you're firing into a very tight group (i.e., point-blank range), some of the rounds may not have enough "oomph" to make it through the attacker's vital organs and blood vessels, which will greatly reduce their stopping power.

The solution? Well, there are two options: GET THE RIGHT AMMO; or get a .380 ACP handgun that has more stopping power.  So if you're looking for something to give you more punch, consider the CZ 83 .380 ACP Pistol which is chambered in both 9x17mm Makarov and .380 Auto. The former cartridge packs 124-grains of hard-hitting energy at 1,000 fps, and the latter has a 180-grain projectile that gets up to 1,000 fps. Either one of these will give you all the stopping power you need!

If there's one thing I hate about teaching people about firearms, it's this:  People who think that the length of a handgun's barrel will make its bullets fly faster and straighter.

The truth is; the velocity (and stopping power) of a bullet has much more to do with the cartridge it was designed for rather than how long or short the barrel is. This is the reason why compact 9mm Luger handguns have similar ballistic performance as larger models, even though they use shorter barrels!  The same principle applies to any other caliber as well.

One such example of this is in .380 ACP handguns which are notorious for having very short barrels. But if you take a closer look at most.380 ACPs chambered pistols, you'll find that their barrels are usually 2.8, 3.5 or 3.9-inches long!

In other words, the barrel length on most.380 ACP handguns are just about the same as a Glock 19 which has a 4-inch barrel. So if you were to take both the G19 and the average .380 ACP pistol out into an open field and test them for ballistic performance, odds are that they would have very similar results because their barrels are almost the same length.

The only time this doesn't apply is when it comes to snub nose revolvers chambered in .38 Special +P rounds. The reason being is that revolver cylinders has limited internal space so there's no room to install high-pressure rounds.

So if you want to use a .380 ACP in a snub nose revolver, make sure it's one that's chambered in .38 Special. The only thing you'll be missing out on is a longer sight radius and better accuracy (which may not matter much in self-defence situations).

Myth #3: "The modern .380 ACP round has less stopping power than the old school types."

This statement is actually 100% true when compared with many of the older .380 ACP rounds which had bullet weights between 90 and 95-grains! This combination of weight and velocity results in very poor ballistic performance (and stopping power) because they don't have enough momentum or energy to cause serious damage once inside the body.

The reason why it's 100% true is that modern .380 ACP rounds are MUCH heavier than their older counterparts; sometimes by as much as 50%. This increase in weight has made them better suited to cause greater damage once they're inside the target (by increasing the amount of kinetic energy).  It also helps that most modern .380 ACP rounds have jacketed or plated bullets which makes them fly straighter and more accurately, thus reducing the potential for collateral damage from missed shots.

In short, there's a reason why all major handgun manufacturers have switched over from producing 95-grain loads to 110-grain loads: They're far superior! In fact, you can expect your favourite self-defense brands to have 110-grain loads available in .380 ACP.

Most people are under the impression that recoil is related to kinetic energy which isn't always the case. Less kinetic energy usually means less felt recoil, but that's not always true of handguns chambered for high powered rifle cartridges!  For example, you'd expect a Desert Eagle handgun chambered for .50 Action Express to have serious recoil due to its massive amount of power...

But you'd be surprised at how manageable it feels in comparison with some smaller caliber handguns even though they produce much higher velocities and greater amounts of kinetic energy.

There's a lot of other factors that contribute to felt recoil such as the size and shape of the handgun, how it's balanced, the type of grip used, cartridge design, etc. So whether or not flat out kinetic energy is responsible for recoil is really up in the air.

What we do know however is that 9mm handguns will have less recoil compared to .380 ACP pistols due to their lighter load. This means they're going to be easier to fire multiple times in quick succession which increases your chances of making a follow-up shot if you need one.

The .380 ACP cartridge is still one of the most popular rounds in the world... But it's not for everyone. If you're shopping around for a self-defense handgun, then you should choose one that feels comfortable in your hand because you'll be using it often. The best way to find this out is by test-firing several handguns (of similar size and weight) until you've found which ones suit your needs best.

Scroll down to find the best deals on the top .38's of 2022 that GunCritic found. Click each link to see real reviews from real people! 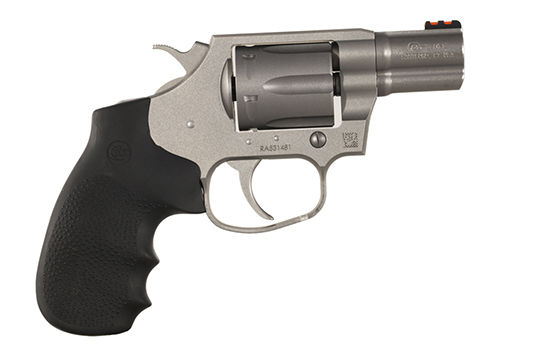 The Colt Cobra® marks Colt's triumphant return to the world of double-action revolvers. Its small frame and 2" barrel make it ideal for concealed carry. The Cobra® features all-steel construction, as well as a rubber wrapped grip that's been moved rearward to help manage recoil. The Cobra® is chambered in .38 Special and is +P capable. This firearm was designed to meet the needs of new shooters and seasoned professionals alike. It's easy and enjoyable to shoot, easy to carry, and draws from the fine lineage that make Colt revolvers special. 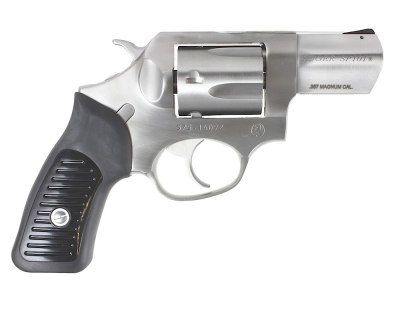 The Ruger SP101 is a series of double-action revolvers produced by the American company Sturm, Ruger & Co. The SP101 is a small frame and all-steel-construction carry revolver, with a five-shot (.38 Special, .357 Magnum, and 9×19mm Parabellum), six-shot (.327 Federal Magnum and .32 H&R Magnum), or eight-shot (.22 LR) cylinder. The Ruger SP101 was introduced in 1989 as the smaller-frame counterpart to the GP100. Both of these revolvers, together, replaced Sturm, Ruger & Co's long-standing staple in the American firearms market, the Ruger Security-Six series revolvers. A 9 mm version was available until its discontinuation around 1998, but was later re-released in early 2018. A basic .22 LR version was also available until 2003 while a redesigned version was introduced in 2011. 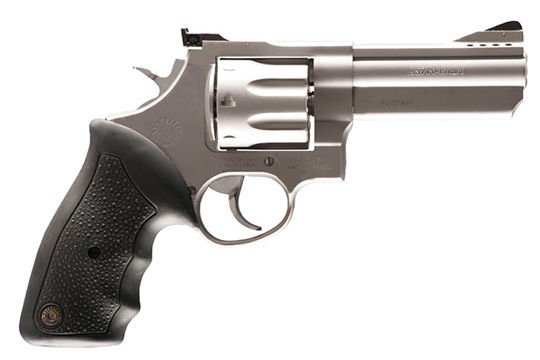 An incredible 8 shots of .357 Magnum in a large frame wheelgun. Hand fitted action is smooth as silk with a crisp trigger right out of the box. The Model 608 is hammer forged for tough performance and sure accuracy. These sleek lines and precision parts define the Taurus reputation for quality and customer satisfaction, especially in the superior performance of these target and hunting handguns. The Model 608 is available with a 4" or 6.5" ported barrel in a stainless steel finish and black rubber grip. 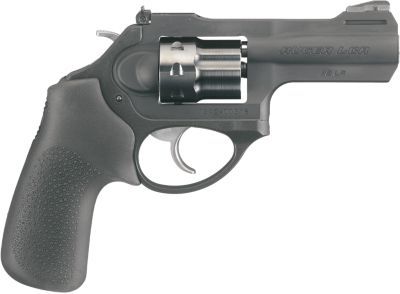 The Ruger LCR is the evolution of the revolver. Its monolithic frame is made from aerospace-grade, 7000 series aluminum in .22 LR, .22 Magnum and .38 Spl +P models and from 400 series stainless steel in the powerful .357 Magnum, 9mm Luger and .327 Federal Magnum models. The patented friction reducing cam is a next generation design in fire control systems that results in a smooth, non-stacking trigger pull and the patented polymer fire control housing holds all the fire control components in their proper dimensional relationships, reduces weight significantly and helps reduce recoil. The high-strength stainless steel cylinder is extensively fluted (reducing weight) and features a PVD finish for excellent durability. Specifications: Weight: 13.5 oz. Overall Length: 6.5" Rate-of-Twist: 1-in-16" Additional Info: Blackened Stainless Cylinder