The stock, trigger system, and receiver of the AR-15.50 BMG large-caliber sniper rifle were directly derived from the AR-15 automatic rifle. Watsons Firearms Inc. created and created the firearms.

Frank Watson, a long-range shooter and enthusiastic hunter from West Virginia, built his first large-caliber rifle in the mid-1990s. Later, he established Watson's Firearms, a business that manufactures and sells guns with.50 BMG calibers. The experts at Watson's Firearms have developed a range of large-caliber rifles using a standard bolt group but varying the forearm material, barrel length, and muzzle brake design:

- "Standard Lite Weight" - a multipurpose rifle appropriate for a variety of uses. Amateur shooters and professional athletes are the biggest consumers on the commercial market. "Modular Lite Weight SWAT" is a tactical rifle with a wooden bed that is intended to arm SWAT or police troops. "Bull Barrel Target" is a target gun with a thicker barrel, a distinctive design of a big wooden stock, the neck of which forms a pistol grip, and the lack of a bipod. In its place of a wooden stock, a high-strength handguard and a tactical shoulder rest are attached (intended for installation in special machines). Since each of these rifles is a single-shot firearm, they are always referred to as "50 BMG Bolt Action."

Additionally, the business offers.50 BMG cartridges and related parts for sale (bullets of various types, cartridge cases and gunpowder). The AR-15.50 BMG large-caliber sniper rifle is intended for use against enemy snipers as well as to eliminate radars, artillery and rocket launchers, aviation equipment in parking lots, and manpower. It was created by Watson's Firearms based on the Colt/Armalite M16/AR-15 assault rifle, as the name implies. Here, the business is not novel; at the moment, such a "conversion" technique to converting common firearms into ones that shoot large-caliber ammunition is nothing new. The pistol grip, trigger mechanism, fuse, and butt were all taken from the regular firearm as a single unit. The business supplies the rest. Since around 1998, shooters have routinely employed Watson's Firearms AR-15 BMG rifles in a variety of contests, including those run by the incredibly prominent FCSA association. The most popular item from Watson's Firearms right now is the AR-15 BMG rifle due to its affordable price and excellent construction. These rifles' 1 MOA accuracy at a 1000-meter range enables shooters to win awards frequently. Due to the heavy barrel mass and substantial effective muzzle brake, shooting from this rifle is generally enjoyable. The blast is moved away from the shooter's head by the barrel length, which also lowers muzzle pressure and results in a less concussive blast. It's interesting to note that Frank Watson prefers to hunt with his large-caliber rifles since, according to him, the adrenaline rush from using such a projectile is greater. One can only speculate as to what he brought home as a trophy.

Large-caliber rifles from Watson's Firearms' 50 BMG Bolt Action series are single-shot, non-automatic firearms. A straight sliding rotating bolt is placed on 3 lugs to lock the bore. The trigger guard's lower edge is reached by the length of the bolt handle when it is closed, and it has a spherical end switch. High-quality trunks from the German business Lothar Walther in a range of thicknesses and lengths are used for installation on rifles. To simplify the design, the barrel may feature longitudinal grooves. Two different kinds of cylindrical muzzle expansion joints are presented to the client: one with a small diameter and four chambers and the other shorter and with only three chambers but with a greater diameter. The stocks of the bull barrel target rifles, standard light weight rifles, and light weight hunting rifles are made of laminated impregnated wood. The neck of the stock clearly resembles a handgun grip. The Bull Barrel Target rifle's stock is the most substantial; it lacks the typical hunting curve. Instead of a wooden stock, the tactical rifle "Modular Lite Weight SWAT" has a metal forearm to which a length-adjustable shoulder rest is attached. The shoulder rest is equipped with a "cheek" that can be adjusted for height and a rear pin support that allows you to change the angle at which the handgun is mounted vertically. A pistol grip is also included with this kind of firearm. The receiver is built of high-strength steel and has a hexagonal section. On the top of the box, where the optics are affixed, is a universal guide. Bipods that fold and can be adjusted in height are included with all of the line's rifles.

The "Watson's Firearms" AR-15 BMG rifle's design The non-automatic, single-shot rifle's bore is locked when it fires by a bolt wedge. The rifle's butt, which slides downward on a unique hinge during reloading, serves as the wedge. The expended cartridge case and cylindrical bolt are then taken out, a new cartridge is put in their place, and the complete assembly is shoved into the receiver. The bolt is secured by rotating the stock into position. The lock button is situated on the left side of the firearm, above the trigger guard, and locks the entire system with a bolt latch. On the left side of the rifle, above the pistol grip, is where you'll find the safety box. When the fuse is activated, the trigger mechanism is blocked. The barrel incorporates a two-chamber rectangular muzzle brake-compensator to lessen recoil during firing. Additionally, the 50 BMG Bolt Action variants include cylindrical muzzle brakes. The butt, grip, and trigger are all taken from an AR-15 rifle, and a second rubber shock absorber is fastened to the butt (the standard AR-15 butt plate is too small for a powerful cartridge). On the receiver's top is a rack for installing optical and night sights. Under the barrel are affixed folding bipods of the "Harris" kind.

Well, if we consider this gun from a military perspective, it obviously has a number of serious drawbacks. The fundamental issue is that the developers failed to consider that all these manipulations of the pistol reveal the shooter, who is easily identifiable when they fire owing to a light in the dark and smoke from burned gunpowder. Additionally, it should be noted that reloading a rifle requires exerting a fair lot of effort, thus even a sniper who is well disguised and swarming while reloading will be easily seen. The US Army was not overly interested in the pistol for all these reasons. It's intriguing that the rifle's bipod may travel along the barrel in addition to its height adjustment because it is fastened to the rifle's barrel with a clamp that also serves as the handle for carrying the gun. A similar technique might be practical if the clamp could be opened without the need of a key and the handle for holding rifles was strengthened individually at the center of gravity, but with the AR-15.50 BMG, there may be a problem. The producers claim that this particular large-caliber sniper rifle type has an effective range of 2000 meters, although in practice it is only about 1500 meters. Despite all of its drawbacks, this firearm has one clear advantage: its 9.8 kilogram weight. The rifle's overall length is 1462 millimeters, and the barrel is 1016 millimeters long.

How would you describe the Watson's rifle? Did you have a particular encounter, and how did it make you feel? 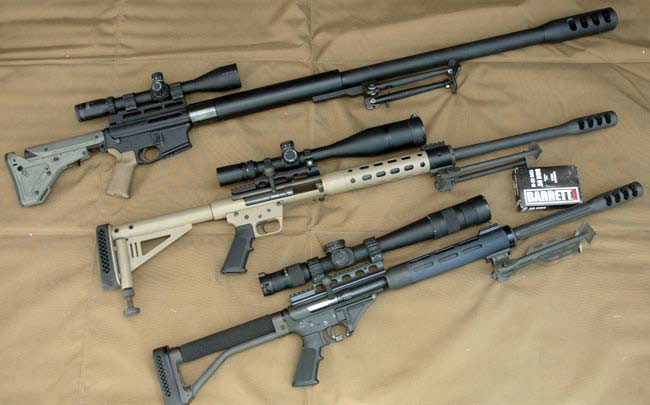