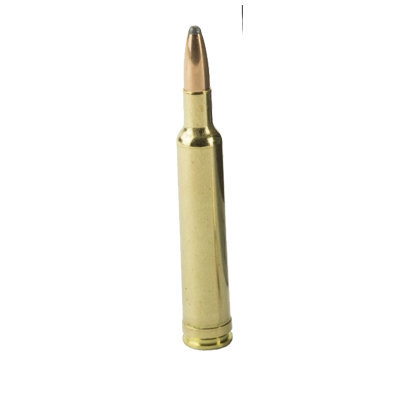 Introduced in 1968 for the Weatherby Mark V rifle, the .240 Weatherby was yet another addition to Roy Weatherby’s ‘worlds fastest’ family of cartridges. The .240 Weatherby still retains its status as the worlds fastest commercially available 6mm, mostly because it is very difficult to drive 6mm projectiles any faster due to case to bore expansion ratio limitations. In fact, it was because of these limitations that Weatherby chose the .30-06 cartridge case as the parent case design for the .240. No other Weatherby cartridge utilizes such a small case. The .240 is essentially the .30-06 necked down to 6mm (.243”) with a belt added (for a ‘magnum’ appearance) and a double radius improved shoulder. The .240 is very similar (velocity potential) to the .240 Holland and Holland Nitro Express released in 1923 and also the 6mm-06 and 6mm-.284 wildcat cartridges. The .240 has never been a highly popular cartridge for reasons that will be discussed in the performance section ahead. Nevertheless, for 6mm fans, the .240 Weatherby is a real powerhouse. The .240 Weatherby is a powerful, fast killing medium game cartridge but is not without contradictions. This cartridge produces far too much recoil and noise to be considered ideal for those who are either recoil shy or have sustained shoulder injuries. At the same time, the .240 lacks the ability to utilize heavy projectiles in comparison to wider bores such as the 7mm08 which is able to utilize 140 grain bullets, it produces a relatively flat trajectory and produces a similar level of recoil. The similar powered .25-06 is able to utilize 120 grain bullets, The .240 puts both premium and conventional projectiles through considerable stress at close ranges. Although close range wounding can be immensely traumatic, bullet blow up is always a risk with all bullet brands apart from the Barnes TSX. For these reasons, the .240 is best viewed as being suitable for the same range of game as the .243 Winchester but with an added X factor. The .240 excels on light game weighing between 40 and 60kg (90-130lb), is ideal for game weighing between 60 and 80kg (130-180lb) but like all 6mm’s requires careful shot placement as game weights become heavier and heavier. The .240 is a more violent, spectacular killer than other 6mm’s and produces fast killing out to ranges exceeding 300 yards compared to the more usual 200 yards. Nevertheless, these great features are soon lost if the .240 is expected to produce just as dramatic kills on game weighing 150+kg (330lb) with ordinary shot placement. Yes, the .240 can handle heavy game the size of Elk and Sambar but as previously suggested, there are several cartridges which are able to utilize heavier, wider, more effective killing bullets with similar trajectories and recoil.